[Review & Giveaway] - To Desire A Devil 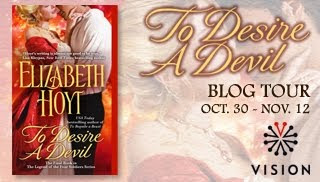 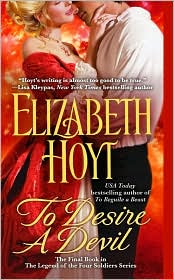 Summary: NOTHING IS MORE INTOXICATING

Reynaud St. Aubyn has spent the last seven years in hellish captivity. Now half mad with fever he bursts into his ancestral home and demands his due. Can this wild-looking man truly be the last earl’s heir, thought murdered by Indians years ago?

Beatrice Corning, the niece of the present earl, is a proper English miss. But she has a secret: No real man has ever excited her more than the handsome youth in the portrait in her uncle’s home. Suddenly, that very man is here, in the flesh—and luring her into his bed.

THAN SURRENDERING TO A DEVIL.

Only Beatrice can see past Reynaud’s savagery to the noble man inside. For his part, Reynaud is drawn to this lovely lady, even as he is suspicious of her loyalty to her uncle. But can Beatrice’s love tame a man who will stop at nothing to regain his title—even if it means sacrificing her innocence?

Thoughts: Reynaud St. Aubyn has just returned home after 7 long years of being held captive. Tortured and half crazy, he can't comprehend why there are strangers in his home and with his title. But then he meets Beatrice the niece of the new Earl and he is drawn to her like no other.

All through the first three books it's known (at least at the time) and assumed that Reynaud St. Aubyn died in the American Colonies. Tortured and killed by Indians. This event was witnessed by his friend and fellow soldiers. So, it's quite a big shock when he arrives back in town.

My first impressions of Reynaud aren't that great. He is cranky and pretty much an ass. Of course, he has good reason because of what he's gone through. But Beatrice comes along and she soothes the savage beast, and shows him how to live again.

To Desire A Devil is the last book in the series. I'm sad to see it come to an end, but Elizabeth Hoyt has done a great job bring things to a close. Reynaud & Beatrice story was intriguing, romantic and at times bit suspenseful. Good read!

Legend of the Four Soldiers Series:
To Taste Temptation
To Seduce a Sinner
To Beguile a Beast
To Desire a Devil

GIVEAWAY
Thanks to Hachette Book Group I have 5 Copies of To Desire A Devil to giveaway. Open to U.S. & Canada. No P.O. Boxes. To enter leave a comment along with you email address on this post. Winners will be announced on November 16th.
at 12:48 AM