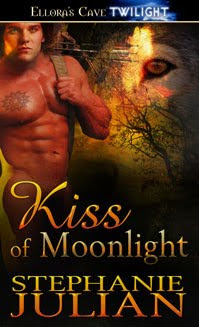 Summary: Plagued by nightmares. Stalked by kidnappers. Tamra McMillan needs a safe haven. When tattooed bad-ass Kyle Rossini steps into her life, the last thing she expects to find is a sanctuary from her demons or steaming hot sex. In fact, everything about him screams danger. But appearances can be deceiving. The tender possessiveness of his touch, the hunger in his eyes, the scorching sensuality of his kiss—all of it sears him into her soul and brands her as his for life.

But otherworldly forces are afoot and death hovers…

Etruscan werewolf Kyle is a loner. The king’s assassin with a killer’s instincts. The last thing he needs is a mate who could be placed in danger because of him. Until he meets the one woman who needs him more than he needs his solitude. When Tamra, battered but not broken, stumbles into his world and tumbles into his bed, she captures his heart. And nothing—not kidnappers or visions of his possible death—will keep him from her.

Thoughts: Kyle Rossini, Etruscan werewolf falls in love with Tamra at first sight. He can't believe it. He wasn't looking for a mate, but he sure found one. Of course danger lurks, but nothing will keep him from making Tamra his or keeping his family safe.

I fell for the hero Kyle from the beginning. From his simple conversation with his daughter in chapter one. To his compassion on meeting Tamra. Did I mention he's pretty easy on the eyes too. Kyle is fierce, but loving and Tamra is scared, but learning to live again. They are just what the other needs.

Kiss of Moonlight is the first book in a new series called Lucani Lovers. This first installment is a great beginning. I loved this story. But the bit of cliffhanger at the end about killed me. I'm eager to read the upcoming books in this series.

Author Website: http://www.stephaniejulian.com/
Where to buy: Ellora's Cave
at 11:18 AM