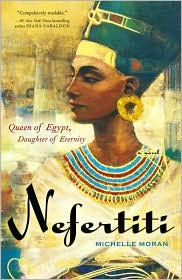 Summary: Beautiful Nefertiti and her sister, Mutnodjmet, have been raised far from the court of their aunt, the Queen of Egypt. But when the Pharaoh of Egypt dies, their father’s power play makes Nefertiti wife to the new and impetuous king. It is hoped she will temper King Amunhotep’s desire to overturn Egypt’s religion, but the ambitious Nefertiti encourages Amunhotep’s outrageous plans instead, winning the adoration of the people while making powerful enemies at court. Younger yet more prudent, Mutnodjmet is her sister’s sole confidant, and only she knows to what lengths Nefertiti will go for a child to replace the son of Amunhotep’s first wife.

As King Amunhotep’s commands become more extravagant, he and Nefertiti ostracize the army, clergy, and Egypt’s most powerful allies. Then, when Mutnodjmet begins a dangerous affair with a general, she sees how tenuous her situation is at her own sister’s court.

Thoughts: Nefertiti is told from the point of view of Nefertiti's sister, Mutnodjmet. This is as much Mutnodjmet story, as it is Nefertiti's. This story starts in 1351 BCE to 1335 BCE.

While there is no one today that knows for sure what Nefertiti and Mutnodjmet's personalities or views were like, the author has done a beautiful job of bringing them to life. I was absolutely transfixed by this book. This is a very powerful and compelling story that I highly enjoyed.

Nefertiti isn't seen in a good light in this book, at least that is what I've taken from reading this story. From the moment she marries Akhenaten, Mutnodjmet becomes her servant bordering on personal slave. I really felt for Mutnodjmet. She was put into such a terrible position, both by her sister and father and their lust for power. Everything about this book pulls you in and will intrigue the reader to the last page. If you ever wonder what Ancient Egypt was like, Michelle Moran will transport you to a different world.