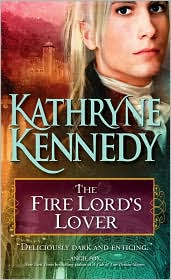 Summary: IF HIS POWERS ARE DISCOVERED, HIS FATHER WILL DESTROY HIM...

In the magical land ruled by ruthless Elven lords, The Fire Lord's son Dominic Raikes plays a deadly game to conceal his growing might from his malevolent father--until his arranged bride awakens in him passions he thought he had buried forever.

UNLESS HIS FIANCEE KILLS HIM FIRST...

Lady Cassandra has be raised in outward purity and innocence, while secretly being trained as an assassin. Her mission is to bring down the Elven Lord and his champion son. But when she gets to court she discovers that nothing is what it seems, least of all the man she married.

Then Dominic and Cassandra together uncover an unspeakable evil, one that threatens the destruction of the magical realm they would give their souls to save.

Thoughts: Dominic is the son of The Fire Lord, who has to be very cautious that his father doesn't find out that his powers are growing. If the The Fire Lord finds out it could be the end of Dominic. He's surround by danger, even from the person closest to him. Lady Cassandra, Dominic's new bride is innocent, but at the same time very dangerous.

The Fire Lord's Lover was beautiful written. It was very Tolkien-esque from the cover to the characters, which was a plus for me. I thoroughly enjoyed the story, I loved both the intrigue and danger. Ms Kennedy's lush description of characters and their surroundings brings the world to life in a way that makes you eager to read more. Original and captivating, a story that will delight both fantasy and historical romance fans.

Upcoming Releases:
Beneath the Thirteen Moons- December 2010
at 12:30 AM