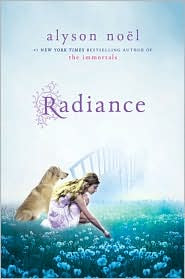 I received this book for review from Macmillian/Square Fish.

Riley, Bodhi, and Buttercup return to earth for her first assignment, a Radiant Boy who's been haunting a castle in England for centuries. Many Soul Catchers have tried to get him to cross the bridge and failed. But he's never met Riley...

Thoughts: Radiance is the first book in a new series. It is a spin off of Ms Noël 's The Immortals. If you've read that series you'll be familiar with Riley, she is Ever's younger sister.

I have yet to read the Immortals series, but I do have Evermore on my shelf. One of the things I learned and loved about this new book is that you don't need to read The Immortals books to enjoy it.

This was my first time reading a book by Alyson Noel and I wasn't sure I'd like this one. But I was captivated by this cover and really wanted find out the girl's (Riley) story. It ended up being a very enjoyable read. Radiance is fun and engrossing. A vibrant read. An interesting take on the afterlife. Riley is a normal 12 year old girl, except she's dead. While she does have her bratty moments, she is charming character. One that you can't help but like.