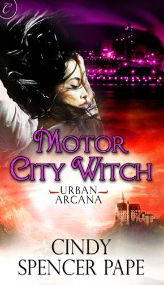 I received this book for review from Carina Press through Netgalley.

Summary:  Once upon a time, Elise Sutton had been a powerful witch and paranormal enforcer.  Once she’d  been madly in love with Fae lord Aidan Greene. But when Aidan had considered his duties more important than their relationship, the  love affair ended badly.  Shortly after, while on the hunt for a rogue demon, Elise was brutalized and almost killed.  Months later she gave birth to a beautiful baby girl. To protect her child – and her heart – Elise decided to live a non magical life. Until she meets Aidan again, and he assumes Dina is his daughter.

When Dina is kidnapped by a racial purity movement, Elise turns to Aidan for help. The icy façade she had built around herself shatters at Aidan’s touch. Together they have to hunt through the human and faery worlds to find Dina and to discover whether or not  they have any kind of chance at a happily ever after.

Thoughts: It's been 5 years since Elise Sutton's heart wrenching break up with Aidan Greene. A lot has changed in that time. Elise has given birth  to a girl named Dina and lives a non magical life.  Aidan has just seen Dina for the first time and it's clear that she is his child, even though Elise keeps denying it.  When Dina is kidnapped-Aidan runs to Elise side to help. He means to bring Dina home no matter what. And has every intention of winning Elise back as well.

It's no secret that I'm a fan of Cindy Spencer Paper's work. I love Heroes In Stone and Urban Arcana is becoming a fast favorite. Motor City Witch is a story of danger, action and romance. There isn't a dull moment.  Elise and Aidan, were featured in the first book, I'm so glad there got their own story.  A dangerous and vibrant world that is contemporary and fantastical. Detroit plays the host to this series that involves both paranormal and fantasy creatures. All around a very enticing world to spend time in.