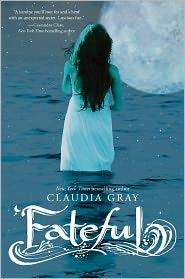 I received an ARC through a swap.

Summary:  It's about a servant girl named Tess in 1912, who wants to escape from the house where she works, and most particularly the lecherous young lord of the manor. But that's not her biggest problem. While on a voyage to America, where she plans to escape and start a new life, she meets Alec, who's ruggedly handsome, fabulously wealthy, intelligent and yet so clearly troubled that she'd rather not fall for him, but she does. That also is not her biggest problem. Alec, it turns out, is a werewolf ... one cursed to change every night, unless and until he surrenders his independence and joins the Brotherhood, a pack of violently misogynistic werewolves who have been tracking him for months. You'd think that would be their biggest problem, wouldn't you?

But no. Their biggest problem -- though they don't know it yet -- is that they're aboard the RMS Titanic.

Thoughts: It's 1912. Tess is a servant for the Lisle family. She along with members of the family, board the RMS Titanic.  Tess has had enough of her employers cruelty so she plans to part ways once they arrive in America.  But before that she has along journey a head of her and she's clueless to the dangers and life changing choices that await her on the Titanic.

This story is filled with danger, action and romance - three elements that I always enjoy. Besides being on the Titanic one of unique factors to the story is the Brotherhood. A group of werewolves that are violent and plain evil. They are out to initiate werewolves that have power and money.  This is exactly why they want Alec, and as for Tess she stands in their way of a very ancient and valuable item to the Brotherhood.

I have always been intrigued by the Titanic and its fatal voyage and I love werewolf stories, so I was eager to read this book.  I haven't read many fiction novels about Titanic, but Fateful turned out to be a fantastic read.  I loved this story and the romance between first class Alec and third class Tess.  Tragic and beautiful.  If you enjoy reading about the Titanic or love stories about werewolves I recommend reading this one.