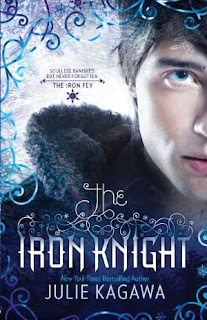 I received this book for review from Meryl L. Moss Media Relations

Summary:  My name—my True Name—is Ashallayn'darkmyr Tallyn. I am the last remaining son of Mab, Queen of the Unseelie Court. And I am dead to her. My fall began, as many stories do, with a girl…

To cold faery prince Ash, love was a weakness for mortals and fools. His own love had died a horrible death, killing any gentler feelings the Winter prince might have had. Or so he thought.

Then Meghan Chase—a half human, half fey slip of a girl—smashed through his barricades, binding him to her irrevocably with his oath to be her knight. And when all of Faery nearly fell to the Iron fey, she severed their bond to save his life. Meghan is now the Iron Queen, ruler of a realm where no Winter or Summer fey can survive.

With the unwelcome company of his arch rival, Summer Court prankster Puck, and the infuriating cait sith Grimalkin, Ash begins a journey he is bound to see through to its end—a quest to find a way to honor his vow to stand by Meghan's side.

To survive in the Iron Realm, Ash must have a soul and a mortal body. But the tests he must face to earn these things are impossible. And along the way Ash learns something that changes everything. A truth that challenges his darkest beliefs and shows him that, sometimes, it takes more than courage to make the ultimate sacrifice. [description from publisher site]

Thoughts:  Meghan now sits on the throne of the Iron Realm and for his own safety she has exiled Ash from her territory.  With Robin Goodfellow as his companion Ash is on a quest to change  - to find a way be able to be with his Queen.

While I loved The Iron Queen, I was a bit disappointed with how it ended.  So, to find out there was gonna be a 4th book and in Ash's point of view - I was pretty excited to read this one.

Excellent read! Took me a bit to get into the world again, but I love that we got to see the story from Ash's POV. Also having Puck along for the ride was great. Funny, and ever the trickster, he had some great lines. The Iron Knight is magical, and gives the readers the perfect ending that will leave you both satisfied and intrigued. Ms. Kagawa's world is full of wonderment and danger. Both beautiful and terrifying. If you haven't picked up this series, do it now you won't regret it.

“Foolish, if you ask me,” the witch stated, waggling her

knife in my direction. “Does a crow become a salmon simply

because it wishes to? You do not know the first thing about

mortality, prince-who-is-not. Why would you want to become

“Because,” Grimalkin answered before I could say anything,

“Ahhh.” The witch looked at me and shook her head.

“I see. Poor creature. Then you will not hear a word I have

to say.” I gazed at her coolly, but she only smiled. “Fare ye

well, then, prince-who-is-not. And Goodfellow, if I see you

again, it will be to hang your skin over my door. Now, excuse

me.” She gathered herself up and tromped down the steps,

taking a swipe at Puck as she passed, which he deftly avoided.

I didn’t like the way Grimalkin continued to stare at me,

a hint of laughter in his slitted eyes, and I crossed my arms.

“Do you know a way for a faery to become mortal, or not?”

“I do not,” Grimalkin said simply, and for a moment my

heart sank. “But, there are…rumors. Legends of those who

Check out the next excerpt at Chick Lit Teens.
at 2:10 AM