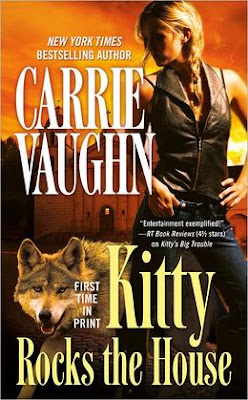 I received this from Tor/Forge, in exchange for an honest review.

Summary: On the heels of Kitty's return from London, a new werewolf shows up in Denver, one who threatens to split the pack by challenging Kitty's authority at every turn. The timing could not be worse; Kitty needs all the allies she can muster to go against the ancient vampire, Roman, if she's to have any hope of defeating his Long Game. But there's more to this intruder than there seems, and Kitty must uncover the truth, fast.

Meanwhile, Cormac pursues an unknown entity wreaking havoc across Denver; and a vampire from the Order of St. Lazaurus tempts Rick with the means to transform his life forever.

Thoughts: Kitty is back from London and she is quickly getting back into her normal routine. It isn't long before werewolf Darren strolls into town looking to join the pack. Plus Master Vampire of Denver, Rick starts acting weird after meeting with a strange vampire.  If they are to defeat Roman, they need all the help they can get. But as each day goes by things for Kitty get more chaotic.

Excellent story! I liked seeing Kitty back home in Denver. Kitty Rocks the House is a riveting read, with humor and fast action which makes the writing flow.  Ms. Vaughn out does herself with every book. I can't wait to see what is next for Kitty & the gang.  If you are a fan of Urban Fantasy and not reading this series, you really are missing out on some great stories.