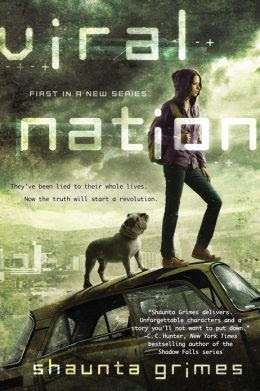 I received this book from Penguin Group, in exchange for an honest review.

Summary:  After a virus claimed nearly the entire global population, the world changed. The United States splintered into fifty walled cities where the surviving citizens clustered to start over. The Company, which ended the plague by bringing a life-saving vaccine back from the future, controls everything. They ration the scant food and supplies through a lottery system, mandate daily doses of virus suppressant, and even monitor future timelines to stop crimes before they can be committed.

Brilliant but autistic, sixteen-year-old Clover Donovan has always dreamed of studying at the Waverly-Stead Academy. Her brother and caretaker, West, has done everything in his power to make her dream a reality. But Clover’s refusal to part with her beloved service dog denies her entry into the school. Instead, she is drafted into the Time Mariners, a team of Company operatives who travel through time to gather news about the future.

When one of Clover’s missions reveals that West’s life is in danger, the Donovans are shattered. To change West’s fate, they’ll have to take on the mysterious Company. But as its secrets are revealed, they realize that the Company’s rule may not be as benevolent as it seems. In saving her brother, Clover will face a more powerful force than she ever imagined… and will team up with a band of fellow misfits and outsiders to incite a revolution that will change their destinies forever.

Thoughts: Clover Donovan is 16 and autistic. Ever since she can remember it's been her dream to attend the Academy.  She is accepted and then turned down when they learn she needs her service dog, Mango with her. Instead she becomes a Time Mariner.  In one fateful mission she learns her brother, West is in danger. She knows she'll have to go up against some powerful people, but she must save him.

Brilliant storytelling!! Viral Nation is an excellent read. A story of many things, but mostly of time travel, doing the right thing and revolution. I was absolutely enthralled with this story,  it's one of the most original and intriguing stories I've read this year. Readers will find themselves rooting for Clover and her friends. She is quite an exceptional character. Shaunta Grimes has created frightening world, but I loved visiting it and can't wait to visit again. A must read for Dystopian fans.