[Review] - A Once Crowded Sky by Tom King 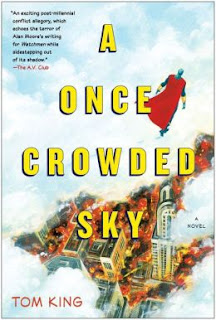 I received this book from Simon & Schuster, in exchange for an honest review.

Summary:  The superheroes of Arcadia City fight a wonderful war and play a wonderful game, forever saving yet another day. However, after sacrificing both their powers and Ultimate, the greatest hero of them all, to defeat the latest apocalypse, these comic book characters are transformed from the marvelous into the mundane.

After too many battles won and too many friends lost, The Soldier of Freedom was fine letting all that glory go. But when a new threat blasts through his city, Soldier, as ever, accepts his duty and reenlists in this next war. Without his once amazing abilities, he's forced to seek the help of the one man who walked away, the sole hero who refused to make the sacrifice--PenUltimate, the sidekick of Ultimate, who through his own rejection of the game has become the most powerful man in the world, the only one left who might still, once again, save the day

Thoughts: Arcadia City is in danger once again. This time the superheroes must sacrifice their beloved Ultimate and each of their super powers it's the only way to save everyone from the latest disaster. Each character deals with this in their own way, but it must be done to go on.

I love comic books so I was excited about this one. But the fact that it's about superheroes that lose their powers, really peaked my interest. For me this was a good read. I loved the mixture of novel and comic book.  A Once Crowded Sky has an old feel of times gone by to it with a great group of POV's. If you're a fan of Watchmen or comic books and superheroes in general, I recommend checking this one out.