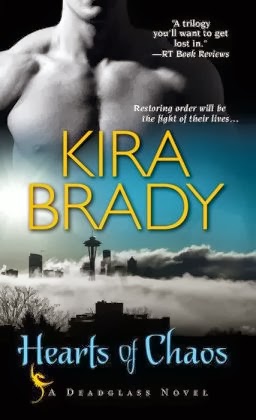 Summary:  To save her world, one woman's fierce quest will put her up against an ancient evil—and a desire too dangerous to deny...

She is betrothed to Seattle's most feared shifter clan leader. Still, the Lady Lucia can never be the dainty aristocratic wife Emory Corbette thinks he needs. And as a malevolent, all-consuming monster plots to take hold of their shattered world, Lucia will risk her untapped powers to defeat it—and challenge the Raven King's seductive rule.

No one in Emory's many lifetimes has ever defied him. Lucia's courage and strength are shaking his iron control to its core...and making him hungry for all she can give. But their only hope is a wrenching sacrifice that could unite humans and shifters in victory—or destroy everything Lucia and Emory desire most.

Thoughts: Great Read! Lucia and Emory were quite the interesting pair. They are betrothed, obviously there seems to be a dislike for each other. But Emory is really (i think) clueless, he had no idea what is in store for him. Lucia is an awesome character. She's fierce and easy to love. As I've mentioned before this is a gritty Seattle, but almost at times at least for me this world has the feel of an epic fantasy. Definitely different. Heart of Chaos is an exciting read. Now this series is set up as a trilogy, but it could very well go on... either way I found the end very satisfying.

Deadglass:
Hearts of Fire (novella)
Hearts of Darkness
Hearts of Shadow
Hearts of Chaos
at 12:00 AM