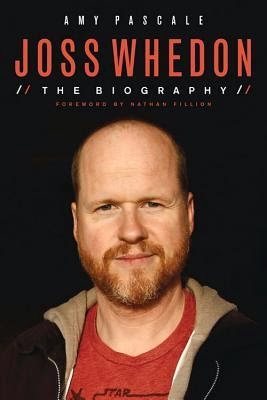 From the cult favorite Buffy the Vampire Slayer, which netted four million viewers per episode, to the summer blockbuster The Avengers, which amassed a box office of $1.5 billion, Joss Whedon has made a name for himself in Hollywood for his penchant for telling meaningful, personal tales about love, death, and redemption even against the most dramatic and larger-than-life backdrops.

This biography follows his development from a creative child and teenager who spent years away from his family at an elite English public school, through his early successes—which often turned into frustrating heartbreak in both television (Roseanne) and film (Buffy the Vampire Slayer)—to his breakout turn as the creator, writer, and director of the Buffy television series. Extensive, original interviews with Whedon’s family, friends, collaborators, and stars—and with the man himself—offer candid, behind-the-scenes accounts of the making of groundbreaking series such as Buffy, Angel, Firefly, and Dollhouse, as well as new stories about his work with Pixar writers and animators during the creation of Toy Story.

Most importantly, however, these conversations present an intimate and revealing portrait of a man whose creativity and storytelling ability have manifested themselves in comics, online media, television, and film.

“Now that I’ve read this and feel like I know Joss as a person rather than merely a hit-making, critically adored peer, my schadenfruede has been reduced to completely manageable levels.” —Rob Thomas, creator of Veronica Mars

“Like a series of great tales told during a boozy night of friends reminiscing, Pascal’s biography of Joss Whedon does what the great artistic biographies do — it makes you want to go back and re-experience his work.” —Patton Oswalt, comedian and actor

About the Author:
Amy Pascale is a director at MTV, where she has worked in on-air and online media for more than 14 years. She is the cofounder and editor of the offbeat web magazine PopGurls, a popular destination for Whedonites, and was an early member of the Bronze, an online community through which the Buffy the Vampire Slayer cast and crew interacted with the show’s fans. She lives New York City. Find Amy online at theamypascale.com and @amypop.

Nathan Fillion is an actor best known for his portrayal of Captain Malcolm Reynolds in the Joss Whedon–produced television series Firefly and its film continuation Serenity, which was directed by Whedon. He also appeared in the Joss Whedon vehicles Dr. Horrible’s Sing-Along Blog and Much Ado About Nothing. He plays Richard Castle on the ABC series Castle. He lives in Los Angeles.
at 7:00 AM