[Review]: Dog with a Bone by Hailey Edwards 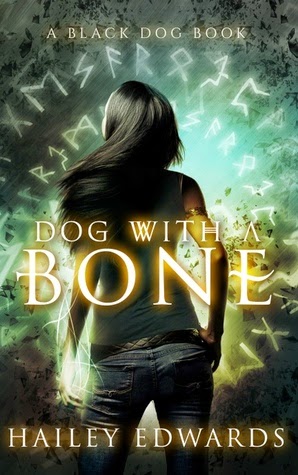 Summary:  Half-bloods with Thierry’s skill set are given two options. They can join the conclave’s marshal program, or they can pack their bags. Turn down the job offer, and you’ve just shredded your residency pass for the mortal realm and booked yourself a one-way ticket to Faerie.

Texas is the only home Thierry has ever known, and she’s not going anywhere. Even if it means following in her notorious father’s footsteps as a peacekeeper. But pinning on the badge opens her eyes to the fact sometimes fae need protection too, and that sometimes humans are the real monsters.

Thoughts: Thierry is a half-blood fae, who calls Texas home. Being a half-blood she either can join the marshal program or back to Faerie she will go. No way is Thierry leaving Texas so she becomes a peacekeeper and learns some hard truths along the way.

Good read! Thierry is a fun character to read. Shaw and Thierry have a interesting partnership. They are good together. I look forward to reading more about their growing relationship.  I can easily tire of fae stories, but Dog with a  Bone was different and refreshing. A fast read but, action filled. Ms Edwards has a way of grabbing the reader and throws them right into her worlds. I love it.

Other Series by Hailey Edwards:
Araneae Nation
Daughters of Askara
at 11:22 AM