The Business of Death

Humanity’s obsession with the business of death is well documented. I’ll be the first to admit reaper lore has always fascinated me. The idea of a being choosing who lives and who dies, or following “higher” orders to carry out sentences it may or may not agree with makes for an interesting story. Which is why when I decided to start a new series, I chose to mix my favorite death portent with another lore subject I enjoy—fae.

The Black Dog is the name for a death portent that appears most often as a huge dog (often calf-sized) with large glowing eyes. The color of the fur and the eyes vary, but the beast is most often black or green furred with green or red eyes. Stories of the dog are fairly common in European folklore and they’re frequently mentioned in Scottish and English lore. 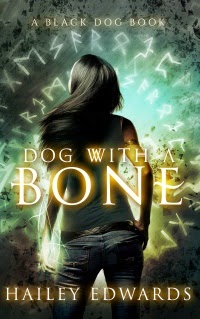 Sometimes called hellhounds, the spectral creatures usually haunt specific locations. Dark and winding roads are a favorite, as are crossroads. More than instruments of death, they’re also blamed for changes in weather patterns and occasionally charged with guarding treasures of great importance.

My new series, Black Dog, is built around the Cù-Sìth myth in particular. The Cù-Sìth is the Scottish name of a mythological hound. Its appearance is similar to that of a wolf with shaggy, dark green fur. It’s known for prowling the moors and highlands for its next victim.

Similar to the grim reaper, the Cù-Sìth is a harbinger of death. They collect souls and escort them into the afterlife. It’s said they release three barks and no more. If you haven’t reached safety by the third bark, you literally die of fright.

In Dog with a Bone, my heroine, Thierry, is the daughter of the Black Dog of Faerie. Half-bloods with Thierry’s skill set are given two options. They can join the conclave’s marshal program, or they can pack their bags. Turn down the job offer, and you’ve just shredded your residency pass for the mortal realm and booked yourself a one-way ticket to Faerie.

Texas is the only home Thierry has ever known, and she’s not going anywhere. Even if it means following in her notorious father’s footsteps as a peacekeeper. But pinning on the badge opens her eyes to the fact sometimes fae need protection too, and that sometimes humans are the real monsters.


GIVEAWAY
Leave me a comment about your favorite lore creature
(along with your email address), and you’ll be entered to win a
$5 Amazon gift card and your choice of title from my backlist in any digital format.
Open to everyone. The winner will be announced on November 11th