Of all the fae, in all the lore, the Morrigan is almost guaranteed a mention. Or perhaps I am sensitized to her appearances and that’s what makes my ears/eyes perk when I see a reference to her.

The Morrigan was considered a goddess of battle and strife. She is most often associated with war and death. Her most common appearance is that of a large, black crow. Those are the most basic threads that characterize her. From there…the imagination of the person telling the story is the only limit to her power. My favorite personification of the Morrigan is probably how she appears in the series, The Iron Druid Chronicles. There is so much rich lore in that series. If you haven’t checked it out yet, what are you waiting for?

When I decided to start a new series featuring fae, the Morrigan was my first choice as a villainess.  Except, she isn’t evil. She just is. Balance is a theme throughout the series, and she is just as unchanging as the heroine (and the heroine’s father). While her actions may be cruel, you would have about as much luck blaming ice for you slipping on it as the Morrigan for committing an immoral act.

But as fascinating as she is, I wanted a potential love interest for my heroine, Thierry. So I created sons for the Morrigan that don’t exist in mythology. Raven and Rook are their names, and it has been fun twisting them (and their mother) to suit the Black Dog world.

I’m so excited for everyone to meet the brothers in the next installment of the series, Heir of the Dog, which releases on January 30th.


GIVEAWAY
How about you? What is your favorite type of fae?

Tell me in the comments & your email address, and you’ll be entered for a chance to win an ebook copy of Dog with a Bone, the first book in the Black Dog series.The winner will be announced on February 13th. 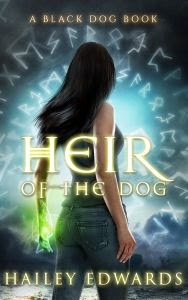 Heir of the Dog
Black Dog #2
By Hailey Edwards

Faerie teeters on the brink of war, and the mortal realm swells with fae refugees desperate to escape the bloodshed. As a half-blooded fae, Marshal Thierry Thackeray has a stake in the outcome of both realms and isn’t afraid to knock a few heads together if it keeps the peace.

When her father goes missing, the only hope of negotiating a truce between the light and dark fae vanishes with him. Eager to avoid another Thousand Years War, the Faerie High Court reaches out to the one person they believe can replace him—the daughter who shares his curse.