My latest release, Soul Solution, happens to be a part of Decadent Publishing’s Beyond Fairytales series, one revolving around taking time old tales and giving them a twist. Easier said than done. There are so many different stories and not just the typical Grimm’s Fairytales most are used to—every culture has their own tales of love and caution that fit within that framework. Sure, the popular ones, like Snow White and Cinderella, might be more fun to subvert because of how familiar people are with the originals. However, what about the more isolated ones? How do you transform them?

I was assigned String of Pearls by Hans Christian Andersen, a story with very little in the way of a plot, but the Beyond Fairytales challenge wasn’t the first time I’ve dabbled in fairytale retellings either. My release, Poisoned Apple, was a contemporary twist on the classic. Whenever you’re borrowing from the old to create something new, it’s similar to cooking up a recipe—you have to pick and choose what elements to focus on.

Sometimes you can take the bones of the story like the plot and place a new veneer over it—I did that sort of transformation with Poisoned Apple. Although the vibe wasn’t enchanted because I wanted to explore the grittier side of Snow White’s psyche, inspiration comes from funny places. What I ended up with in Poisoned Apple is a similar plot to Snow White with several subtle nods to the original, while using a modern setting and equally modern characters. As for Soul Solution, I happened to do the opposite. Instead of using the framework of the story, since it’s sort of dull, I honed in on the details and themes—the importance of the Copenhagen line.

While I thoroughly enjoy writing a unique story as well, there’s something scintillating about taking the elements of those time old tales and using your imagination to expand the universes or examine the stories from different perspectives. Both require creativity, and oftentimes, writing a new version of a fairy tale can work like a prompt, giving inspiration a channel to work through.

No matter how you do it, one key thing is important when transforming fairy tales—make it your own. Don’t regurgitate the same old story that’s been told before, but instead use the format to make your story one that only you could tell. If you happen to be looking for a fairytale read, make sure to check out the wonderful Beyond Fairytales series which features a multitude of Decadent Publishing authors tackling a ton of tales! 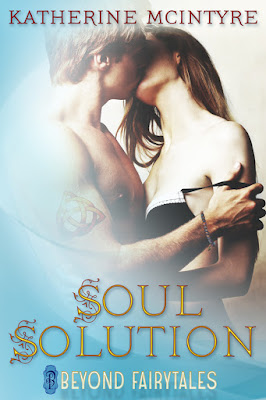 
For Erik Anderson, the Copenhagen line is his curse. He takes the train every night en route to collect souls. Like any lovelorn fool, he bargained his own long ago, and now pays the price—a lifetime of loneliness as a grim reaper. Stay distant—that’s been his mantra and what keeps him sane.

Until Mina Castner drops into his life like a whirlwind, one spilled drink leading to staying up until dawn with the woman. He believed one night couldn’t hurt, but he sorely underestimated her determination. Every encounter between them is reprieve from the guilt of reaping souls every night, but it can’t last. Even if she sparks long buried feelings, and even if her sheer presence intoxicates him, he can’t let this continue. For humans, his touch is poison, and if he slips up, it could cost her life. 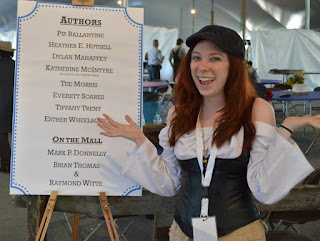 Author Bio:
A modern day Renaissance-woman, Katherine McIntyre has learned soapmaking, beer brewing, tea blending, and most recently roasting coffee. Most of which make sure she’s hydrated and bathed while she spends the rest of her time writing. With a desire to travel and more imagination than she knows what to do with, all the stories jumping around in her head led to the logical route of jotting them down on paper. Not only can her poetry and prose be found in different magazines, but she’s had an array of novels and novellas published through Decadent Publishing, Boroughs Publishing, Hazardous Press, and Jupiter Gardens Press. For more casual content, she’s a regular contributor on CaffeineCrew.com, a geek news website.