A Different Style of Pirate
Growing up, I always had a fascination with pirates. Whether it was Treasure Island, Pirates of the Caribbean, or even family vacations down to the Outer Banks where Blackbeard had landed, all of these things grabbed me by the throat and never let go. I’ve always toyed with the idea of writing a pirate adventure story, but nothing ever fully gelled, until I crashed into the steampunk genre. That’s when I discovered airship pirates.

Steampunk resurrected airships in fantasy full force, even though I can recall earlier examples in high fantasy series that sometimes integrated technical aspects, such as Terry Brooks’ Voyage of the Jerle Shannara. What these ships of the skies offered was more than just the opportunity to explore a new aspect of steampunk, but a dawning of a new era of pirate tales.

While stories involving ships of the sea have a massive amount of variation based upon the style, when creating a story with airships, there’s a whole plethora of other aspects involved. Not only do the airships in steampunk tales tend to be drastically different from blimps, but a lot of them are running on imaginative technologies featuring things like steam engines.

Another massively customizable aspect about airships involves the balloon itself—sometimes they’re featured more like blimps, where in other instances they’re overhead balloons with attached ships. When I decided to write my Take to the Skies series, not only did I integrate an entirely different fuel source, aether that gets converted in the steam engine that powers my airship, but I also chose to do a traditional ship below with a metal framed balloon overhead.

With all the creativity involved in the process, it’s no wonder we’re faced with a new renaissance of pirate stories. So if you’re looking for your next swashbuckling tale, instead of searching the seas, take to the skies! 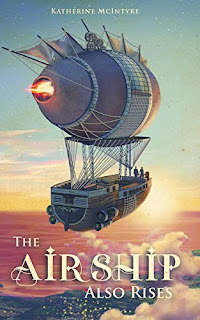 The crew of the Desire returns for one final, thrilling adventure.

Ever since Bea and the crew stole that box from the British Merchant ship, they’ve been drowning under enemies. The Brits, the Morlocks, and the man who started it all—their ex-employer.

However, Bea finally tracks him down and prepares for one final fight against the man who made their life hell. He’s got superior numbers and more weapons and wealth than she could dream up, while she’s got a threadbare crew running on grit and dreams alone. The crew of the Desire doesn’t stand a chance.

But Bea’s spent a lifetime defying the odds, and she and the crew will risk it all—their livelihood, their ship, and their lives, for the chance to fly the skies free once more. Secrets will unravel and loyalties will be tested in the smoking conclusion of the Take to the Skies series.

“When do we get to shoot something?” Sabine complained, her hand brushing over the piece at her side. Girl might whine now, but the couple of bounty drops she’d performed didn’t classify her as a pro. Cracking shots at a paper target was land and air different from trying to fight a living, breathing enemy.
“I’m sure if you asked politely, they’ll come parading in for you to try,” I shot back, wishing for all the world I didn’t have to babysit. Somewhere up above, Captain Morris snickered at me—payback for all the sass and vinegar I doled his way when I was her age. Not like I hadn’t earned this tenfold.
A rustling sound at the opposite end of the warehouse snared my attention. Mordecai blended into the shadows over there, but some more folks pushed the door open with a creak. They stepped in through the entrance, their silhouettes accented by the bright rays of a summer afternoon.
Matilda was out and pointed their way before I sucked in another breath.
“State your intentions, or we’ll be peeling your bodies off the floor,” I called out.
A shot rang through the air, coming from beside me. My jaw twitched.
Sabine stood with her pistol aimed and her finger on the trigger. Those manicured brows pulled together in fierce concentration.
“Damnit, Sabine,” I hissed, shooting her a glare. “What happened to following my lead?”
She stared at me with a familiar brand of insolence in those grey eyes all while feigning innocence. “My finger slipped.”
My blood boiled, and I near had a conniption on the spot. A thousand curses on girls with smart mouths and access to firepower.