Out Today!! Vampire Devil by Rosemary A Johns 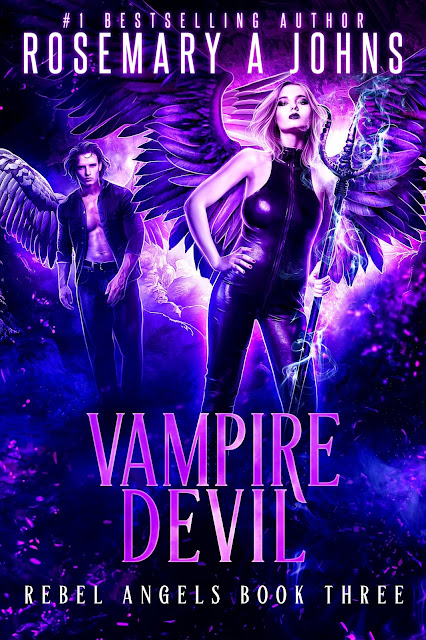 This is why Fallen angels fear the light…
Snatched to the Under World, Violet discovers that the father who abandoned her as a baby is the tyrannical king of hell. She’s forced to battle in the Bone Carnival to prove her loyalty in a court of the wildest vampire rebels ever to be cast out of Angel World. Or else she won’t be able to save the angels…or her sister.

When she defies the anarchic vampire court, she’s tested in three impossible Devil’s Quests, which risk letting out the worst monster of them all: and it’s inside her. If she fails, she’ll be bonded eternally to a ruthless general, whilst the vampire geek and sexy angel she loves will become the elite army’s playthings.

The Apocalypse is coming, and Violet may just be the weapon that destroys the world…
Fans of Buffy and Lucifer are sure to devour Vampire Devil, the third book in the addictive urban fantasy romance series REBEL ANGELS by USA Today author Rosemary A Johns. Buy your copy now to begin the thrilling adventure today!

WINNER OF SILVER AWARD in the National Wishing Shelf Book Awards.
ROSEMARY A JOHNS is author of the #1 bestselling REBEL VAMPIRES and REBEL ANGELS series, as well as other REBEL worlds coming soon!

Rosemary is also a traditionally published short story writer. She studied history at Oxford University and ran her own theatre company. She’s always been a rebel…