I'm very excited to have Judith James as my Guest today. Her latest book Highland Rebel is set to release September 1st. I'm her next stop on the book tour, today she'll be talking about her love of Scotland. Judith thanks for stopping by. :)

~~~~~~~~~~~~~~~~~~~~~~~~~~~~~~~~~~~~
Thanks very much for inviting me, Anna! I mentioned in a previous post that my love of Scotland, at least in centuries past, was more a love of the Highlands. I talked about the wild and rugged scenery and how I thought of it as almost a character itself as well as a metaphor for the “heroes’ journey” as well as the difference between the Highlanders and their supposedly more civilized neighbours. There were two things I didn’t mention. One is Scotch whisky. There’s a story about this particular blend I’ll be talking about on a blog on writing and magical thinking, but for now I’ll be curious if anyone who’s read the book can tell me why it’s special. I should add that I learned that ALL Scotch whisky is special. Not only because it comes from Scotland but because whisky made in the Highlands is unique. Here is a little snippet from Highland Rebel that explains why.

“They descended past tumbling rocks, peat bogs, and rolling wooded hills into a valley that come summer would ripen with barley. When malted and combined with the peaty water from the burns that flowed down from the surrounding mountains and hills, it would capture the unique flavour and aroma of her beloved home, becoming uisge beatha, the potent whisky that served as medicine, comfort, and currency upon which her family’s fortune had been made.”

Lowland malt whiskies are generally lighter than their Highland counterparts and more uniform in flavour, while whisky from the Highlands has a distinctive flavour based on the peat bogs and water in the area in which it’s produced. A true connoisseur can tell where a Highland whisky was distilled by its smell and taste.

The other very important thing I didn’t mention was Men in kilts The Highland Boundary Fault divided much more than geographies areas. It separated based on culture, religion, language and dress. The Highlanders preserved Gaelic speech, customs and clothing, centuries after the Anglicization of the lowlands. The kilt was strictly highland dress until well into the 1800’s. In many respects Highlanders had more in common with the Gaelic Irish than the Scots who lived to the South. With a few noticeable exceptions, the 17th century Lowland Scots were a serious minded moralistic people with a somewhat rigid approach to government and religion as reflected by a severe form of Presbyterianism and a strict adherence to Kirk (church) law.

Roman Catholicism remained strong in parts of the Highlands, as did Anglicanism, and unlike their farming and city dwelling neighbors in the Lowlands, who had largely moved to a tenant based land system, the Highlanders were still bound by loyalty to their clans. They were looked on by both the Lowland Scots and the English as “The wild Irish” It was a common prejudice that while Lowlanders were of “domestic and civilized habits” the Highlanders were “a savage and untamed nation, independent, warlike and rude.” Warrior clans were a threat to most central governments and kilts and other symbols of Highland culture were banned after the Jacobite rebellions in an attempt by King George II to suppress Highland culture. Reiving and raiding, independent warlike and proud, the Highlanders were in effect, the “bad boys’ of the British Isles, and we all love bad boys don’t we? There is a proper way to wear a great kilt or breacan and of course they have many uses making them ideal clothing for rough men in rough terrain.

I have included a small excerpt that illustrates one such use below from my book, Highland Rebel (in stores September 1, 2009!): 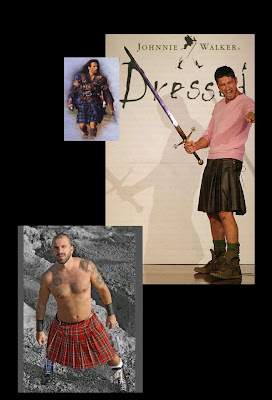 “You’re not paying attention to me, are you?”
“Eh? What’s that? Sorry, love, I didn’t hear you. Wasn’t paying attention. I had my eyes on your perfectly formed arse.”
Catherine fixed him with a glare worthy of a Scottish schoolmaster. “This is serious business, Jamie. If you’re to pass for a Highlander you’ve got to get the kilt just so.”

“Bah! You’re a hoydenish vixen. You just want to ogle my knees.”
“Nonsense! I’m sure you’ll find the… ah…freedom and…utility very appealing once you try it on.”
“You mean you think I’ll like the feel of the family jewels waving free?”
Blushing, she spread both great kilts on the ground. “One lays down on it like so. Oh stop grinning, Jamie, and do try.”
She was so earnest and eager in her lesson that he hadn’t the heart to tell her he’d worn a kilt a time or two before. He watched with solemn attention as she showed him how to roll it around his hips and then drape the upper half across his shoulder.
She surveyed him critically, nodding her approval, and he seized her by her hips and pulled her up against him hard. “Ah yes, my love. I see now exactly what you mean.”
His new kilt bulged in an unseemly manner and Catherine had no trouble imagining what lurked beneath. She felt a stab of excitement and didn’t object when he grasped the back of her head with one hand and pulled her mouth to his. Blushing crimson, eyes tightly shut, she ran a hand down his hips to his thighs, flipping aside his kilt and reaching underneath.
It was another hour at least before they left.
© Judith James, Sourcebooks Casablanca, 2009

Well that’s certainly one reason I love Scotland. I’m happy to answer any questions and mine to you is- Who is your favorite Highlander? 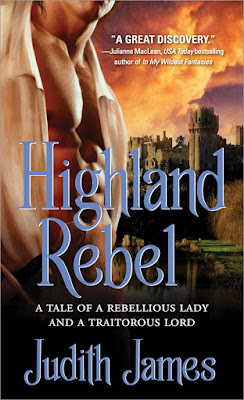 Highland Rebel by Judith James,
in stores September 1, 2009!
Amidst the upheaval of Cromwell's Britain, Jamie Sinclair's wit and military prowess have served him well. Leading a troop in Scotland, he impetuously marries a captured maiden, saving her from a grim fate.

A Highlands heiress to title and fortune, Catherine Drummond is not the woman Jamie believes her to be. When her people effect her rescue, and he cannot annul the marriage, Jamie goes to recapture his hellcat of a new wife...

In a world where family and creed cannot be trusted, where faith fuels intolerance and war, Catherine and Jamie test the bounds of loyalty, friendship, and trust... 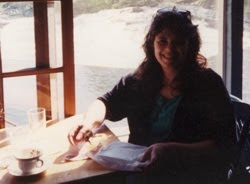 About the Author
Judith James has worked as a legal assistant, trail guide, and counselor. Living in Nova Scotia, her personal journey has taken her to the Arctic and the West Coast. Her writing combines her love of history and adventure with her keen interest in the complexities of human nature and the heart's capacity to heal. For more information about Judith, please visit
http://judithjamesauthor.com


Judith, thanks again for coming and sharing your love of Scotland with us!!

GIVEAWAY: Courtesy of Sourcebooks, there are two copies of Highland Rebel up for grabs. To enter leave a comment along with your email address and don't forget to mention who your favorite Highlander is. Open to U.S. & Candada. I'll announce the winners on August 31st Good Luck!
at 12:54 AM