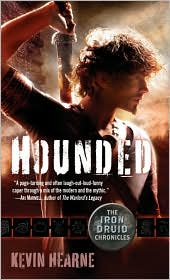 Summary:  Atticus O’Sullivan has been running for two thousand years and he’s a bit tired of it. After he stole a magical sword from the Tuatha Dé Danann (those who became the Sidhe or the Fae) in a first century battle, some of them were furious and gave chase, and some were secretly amused that a Druid had the cheek to defy them. As the centuries passed and Atticus remained an annoyingly long-lived fugitive, those who were furious only grew more so, while others began to aid him in secret.

Now he’s living in Tempe, Arizona, the very last of the Druids, far from where the Fae can easily find him. It’s a place where many paranormals have decided to hide from the troubles of the Old World—from an Icelandic vampire holding a grudge against Thor to a coven of Polish witches who ran from the German Blitzkrieg.

Unfortunately, the very angry Celtic god who wants that sword has tracked him down, and Atticus will need all his power, plus the help of a seductive goddess of death, a sexy bartender possessed by a Hindu witch, and some good, old-fashioned luck of the Irish to kick some arse and deliver himself from evil.

Thoughts: Atticus is many things, but the most important is that he is a Druid. The last of his kind. He is many, many centuries old - even though he only looks to be in his 20's.  Atticus is powerful and wields a sword.  A magical sword, that a Celtic god wants bad and said god will do anything to get it.

Excellent read! Hounded is a real page turner. Every time I was gonna take a break I had to read the next chapter to see what was going to happen. A fast and entertaining tale. Atticus is a great character to spend time with. Witty, sharp as a tack. Really a bit of a bad ass, I think he could give Mr. Harry Dresden a run for his money. I loved his sense of humor (even his dog is funny) and that the book is steeped in Celtic mythology.  Looking forward to reading the next installments. Fans of this genre will eat this one up.