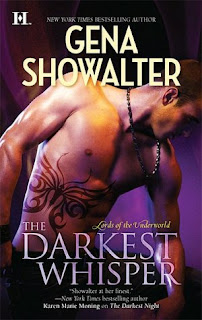 Summary: He is the keeper of Doubt and his entire world’s about to be rocked.

Bound by the demon of doubt, Sabin unintentionally destroys even the most confident of lovers. So the immortal warrior spends his time on the battlefield instead of the bedroom, victory his only concern…until he meets Gwendolyn the Timid. One taste of the beautiful redhead, and he craves more.

Gwen, an immortal herself, always thought she’d fall for a kind human who wouldn’t rouse her darker side. But when Sabin frees her from prison, battling their enemies for the claim to Pandora’s box turns out to be nothing compared to the battle Sabin and Gwen will wage against love…

Thoughts: Sabin houses the demon of Doubt. Any lover he has ever had has been crushed with doubt by the demon. While he isn't against bedroom activities, it's better he concentrates on the coming war with the Hunters. Especially since his last lover killed herself. The fight is his only care - until a mission to Egypt changes everything and he meets an imprisoned harpy, Gwendolyn the Timid.

I loved this book. I've enjoyed the previous stories, but Sabin so far as turned out to be my favorite Lord. Both he and Gwen are great characters, but Sabin stands out. He is always a warrior, tough, giving no mercy, that is until he meets Gwen and we get to see a bit of his softer side. I love that even though he is ever trying to protect her, he comes to treat Gwen as an equal. In the end they make a great pair. The Darkest Whisper is a page-turner. Delicious and full of action. I look forward to reading the next book. If you haven't checked this series out, definitely do so.