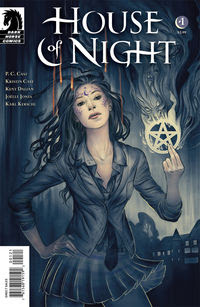 Summary:  Until recently, Zoey Redbird was an average high-school student worrying about grades, boys, and breakouts. But priorities have a way of changing when you are marked as a vampyre, enroll in the vampyre academy House of Night, and have to figure out a whole new social hierarchy, affinities for elemental magic, and physiological changes that make you crave blood.

Follow Zoey, and her group of devoted friends, as they turn to The Fledgling Handbook, a historical vampyre tome, in hopes of better understanding this big, new world of vampyrism.

Thoughts: Zoey's life has drastically changed in a very short amount of time. So, when she becomes the new leader of the Daughters of Darkness it's no surprise that she is doubting herself and feeling lost.

Going into reading this first issue I thought it was gonna be Marked (book #1) in comic book form. But it's new scenes that take place in the storyline of Betrayed (book #2).  I enjoyed the story. Especially the part that tells the story of Freya the Viking Goddess. The art inside is pretty good, but I love the art work of the covers much more. The girl depicted on the cover is close to how I picture Zoey. Fans of this series I will love the new story.


GIVEAWAY:
It's been a while since I did a giveaway for comics, so I thought this would be a good time to do it. :) I have put together a comic book pack to giveaway. To enter leave a comment telling me who your favorite superhero is, along with your email address. Open to U.S. residents. The winner will be announced on July 13th. 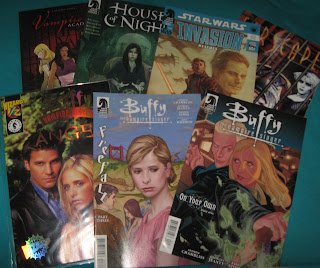