[ARC Review] - A Time of Dying by Hailey Edwards 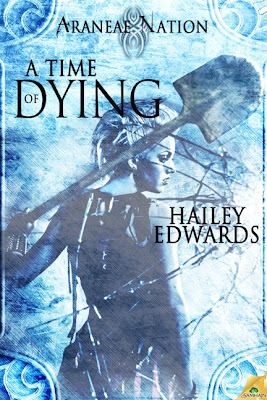 Summary:  They just might survive…if they don’t kill each other first.

Once the future Segestriidae maven, Kaidi lived a privileged life. Now she spends her nights haunting cities ravaged by the plague. Spade in hand, she stalks rows of freshly dug graves for corpses…and then she takes their heads.

Her new life is caked in blood and spattered with gore, but it’s hers. At least until—to her fury—she’s caught napping.

A plague survivor by the skin of his teeth, Murdoch risks his neck to solve the mysteries left in its wake. Bodies have gone missing. Guards have left their posts and never returned home.

When he rouses a female dozing among the dead, he’s unprepared for the violence of her response. Or his. Beneath the grime, she’s lovely. Too bad the blood under her fingernails belongs to his clansmen.

He has no choice but to follow this alluring creature deeper into her world of winged beasts and flesh-eating monsters. She holds the knowledge he craves, but the price is high—and they may both pay for it with their lives.

Warning: This book contains one heroine in desperate need of a bath and one hero willing to wash away her sins. Expect threats, swears and general cursing. Love is a slippery slope, and these two are sliding.

Thoughts: Kadi was on the way to becoming a Segestriidae maven, but the plague hit and she lost everything. Barley surviving herself. She spends her time taking her rage out on corpses already put to rest with her spade.  She is a lost soul. When Murdoch walks into her life it is a shock for both of them.

Fantastic read! From the first page your thrown into the thick of things. At times it was almost like I was watching a movie. For me it was that vivid. Kaidi is quite a mysterious character. She comes off violent  -  but her evident sorrow and feelings of guilt make her an interesting and likable character.  A Time of Dying is a dark, bloody and sensual read. Edwards has written a excellent installment. If you have been reading Araneae Nation, you won't want to miss this one.

Araneae Nation series:
A Hint of Frost
A Feast of Souls
A Cast of Shadows (novella)
A Time of Dying